Kelly Moran was born in the Catskill Mountains of New York. On the day Woodstock opened her family loaded up their powder blue ford station wagon and moved to Florida. She always wanted to be an artist. On the streets of Fleischmanns New York she tried selling her twig collages at a tender age of 6. The same streets that the comedian Milton Berle and other entertainers from NYC walked down many years prior. In Florida Kelly started her art education by studying velvet Painting at the Woolworths she and her grandmother frequented. Kelly has an AS degree from Florida School of the Arts and a BFA in painting from Louisiana Tech University, studied ceramics at University of Houston Graduate program. She worked at Little Egypt Enterprises, a collaborative print and ceramic studio 1984-86. After Little Egypt Enterprises she created a studio in Midland Texas 1986-89 and married her college sweetheart in Big Bend National Park. The next studio was in Frenchtown New Jersey 1989-9 a small Victorian village. She showed work in New York City at Gallery Henoch and Sandy Webster Gallery in Philadelphia. 1995-97 she lived in Jakarta Indonesia where she traveled, studied indigenous textiles and ceramics. During her time in Indonesia, she was invited to speak about her work at an Australian ceramic conference. At the end of her stay in Indonesia she rode a bicycle with no breaks down a volcano, visited Toajaland on the Island of Sulawesi where they have houses that look like boats, and visited Komodo Island where they have actual dragons. She unknowingly was pregnant.  Upon returning to the states, she and her husband landed in Dallas for three years. Kelly, with her family, returned to Houston in 2000. Moran was associate director of Texas Collaborative 2005-2011, a place where National and international artists collaborated to produce prints. Kelly has shown her work at galleries in Houston, Dallas, Galveston, and New Orleans, Houston Art Fair, NYC Outsider Art Fair along with national and international group shows.  She taught Printmaking at the High School for Performing and Visual arts 2011 to 2016. In 2017 Kelly was invited to a residency program in Hilmsen Germany where she created prints and had a show of her work at Monchskirche, a 13th century church in Salzwedel Germany. Her work is in many private and museum collections such as the Museum of Fine Arts, Houston TX., New Orleans Museum of Art, The Contemporary Museum of Plainview, Plainview TX. Moran presently has a studio in Houston Heights. She occasionally collaborates on prints with artists. Her past training in painting, ceramics and printmaking has contributed to her love of craftsmanship and process-oriented work. She draws on contemporary events, personal life, and intuition to compose her well-crafted, quirky universal prints and collage assemblages.

I collect paper dolls and use them in my art. I did not collect them as a kid. I had barbies. I am not sure how it began. It became an obsession. From the 1930’s to 1950’s, paper dolls experienced a golden era, as paper proved affordable during the depression and remained available in WWII’s ration economy. This time period is the bulk of my collection. Some of the paper is very delicate and therefore I decided to copy and enlarge the clothes, and then build a story around them.  I use only the clothes with the tabs to leave the narrative open. The background collage is a heavier, more durable vintage paper from around the same period as the paper dolls. It consists of vintage wallpaper, decorative end sheets of encyclopedias, maps, vintage advertisements, etc. The paper is treated with a uv protective varnish. Cracker jack toys, watch parts and repurposed well-loved objects are embedded in the works. Trolling estate sales and eBay prove to be a rich source of art materials. I have collected these things for years knowing one day I will use them. My studio is full of materials, and I go on a treasure hunt to find the parts I need for each narrative.

If I were an appliance, I would be a toaster because it makes warm, comforting, crunchy toast. 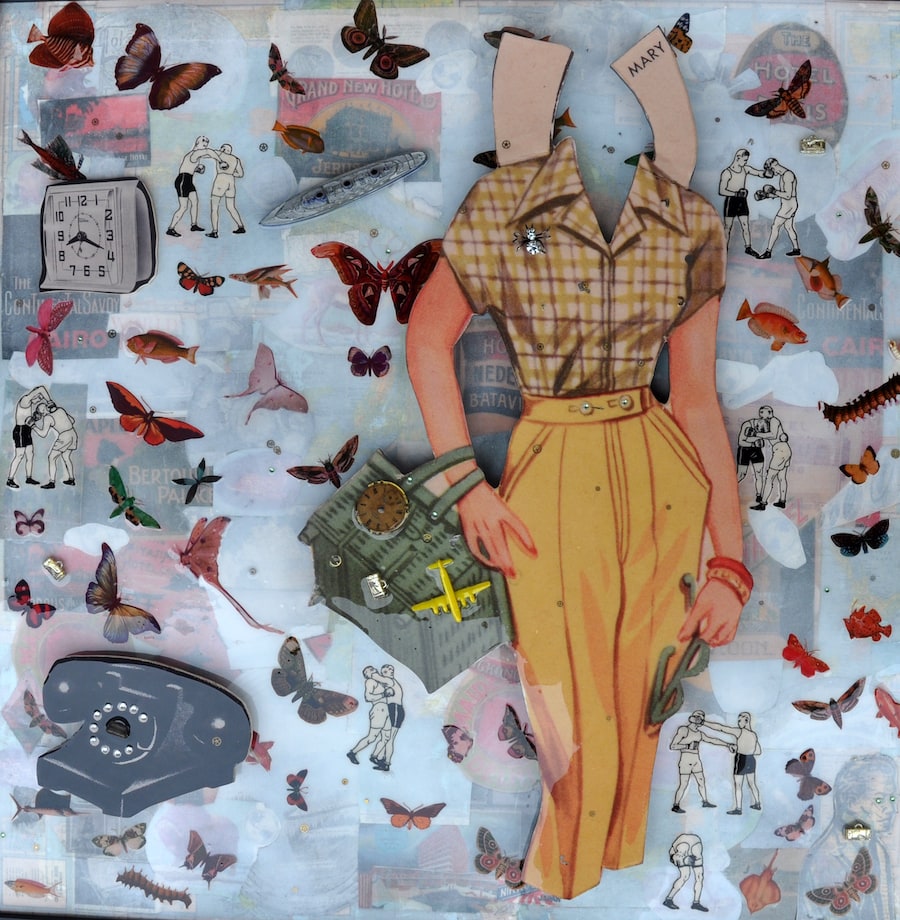 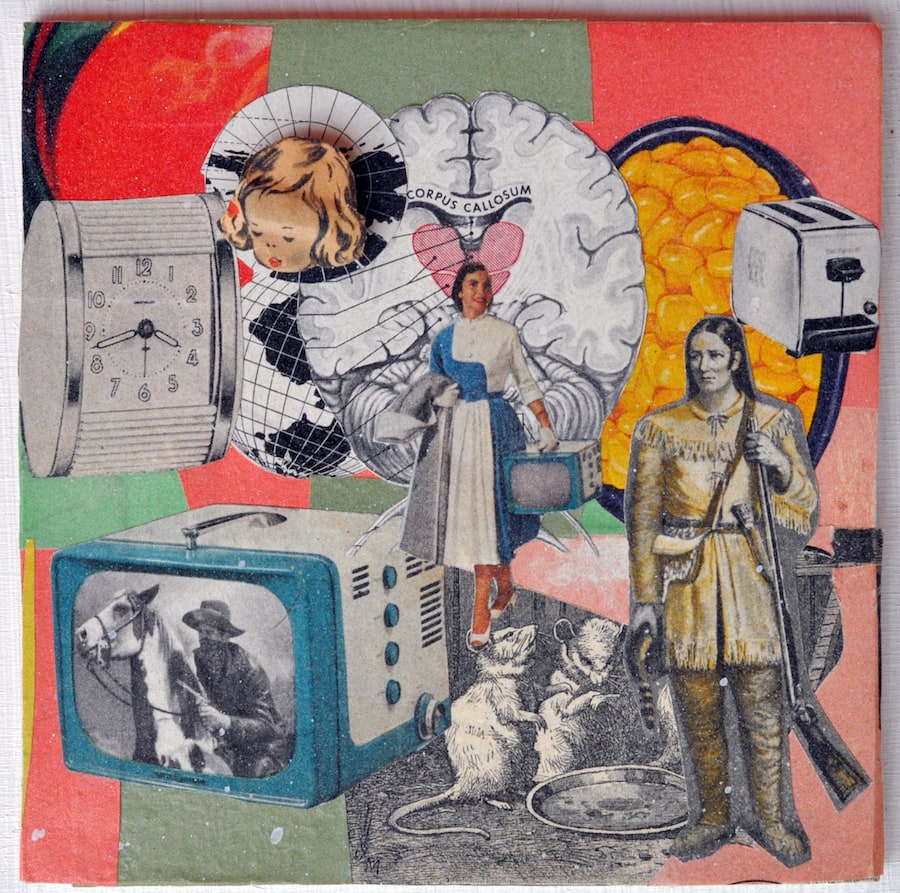 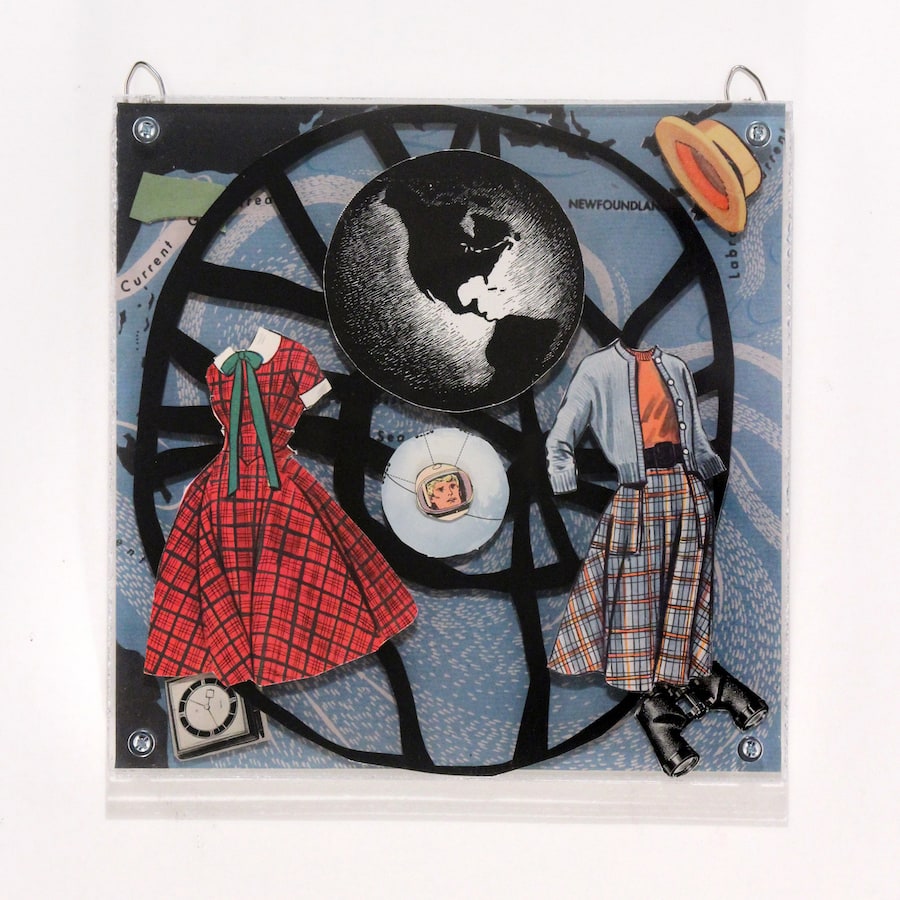 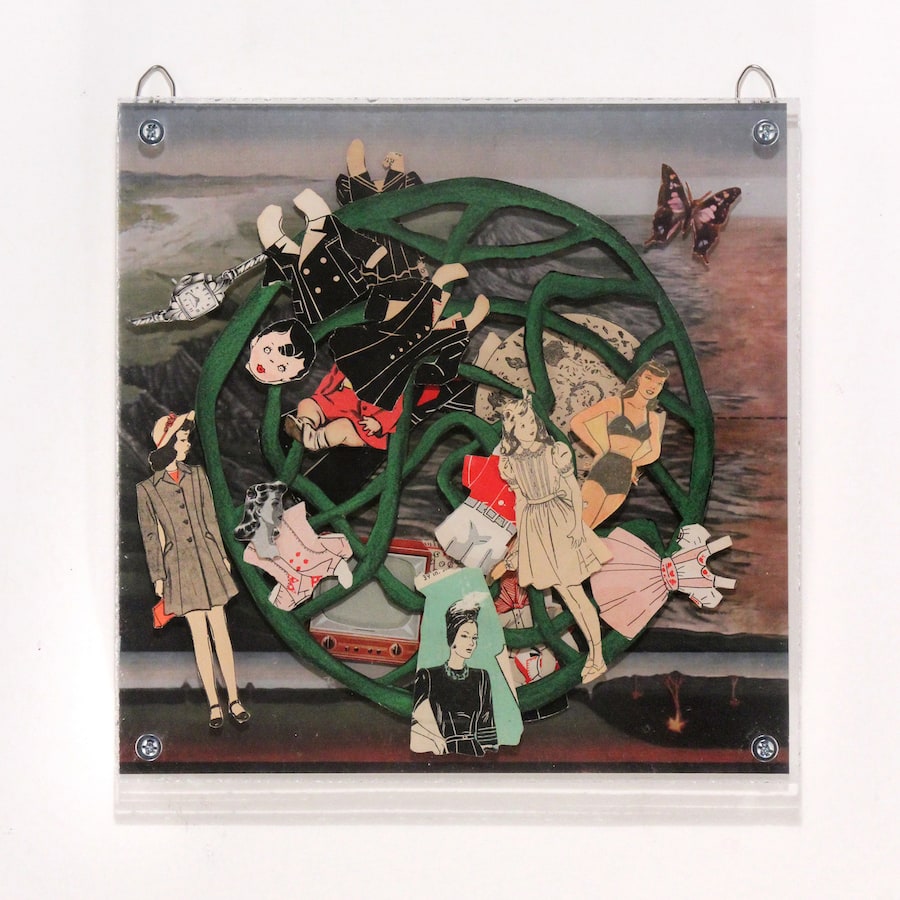 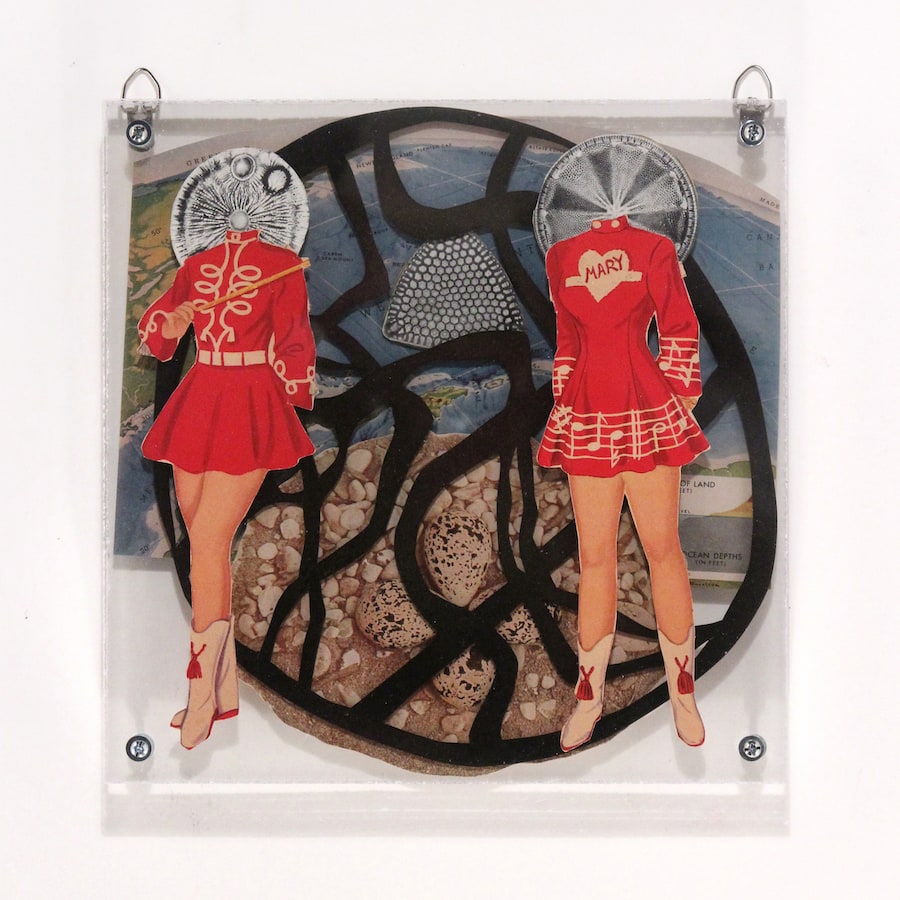 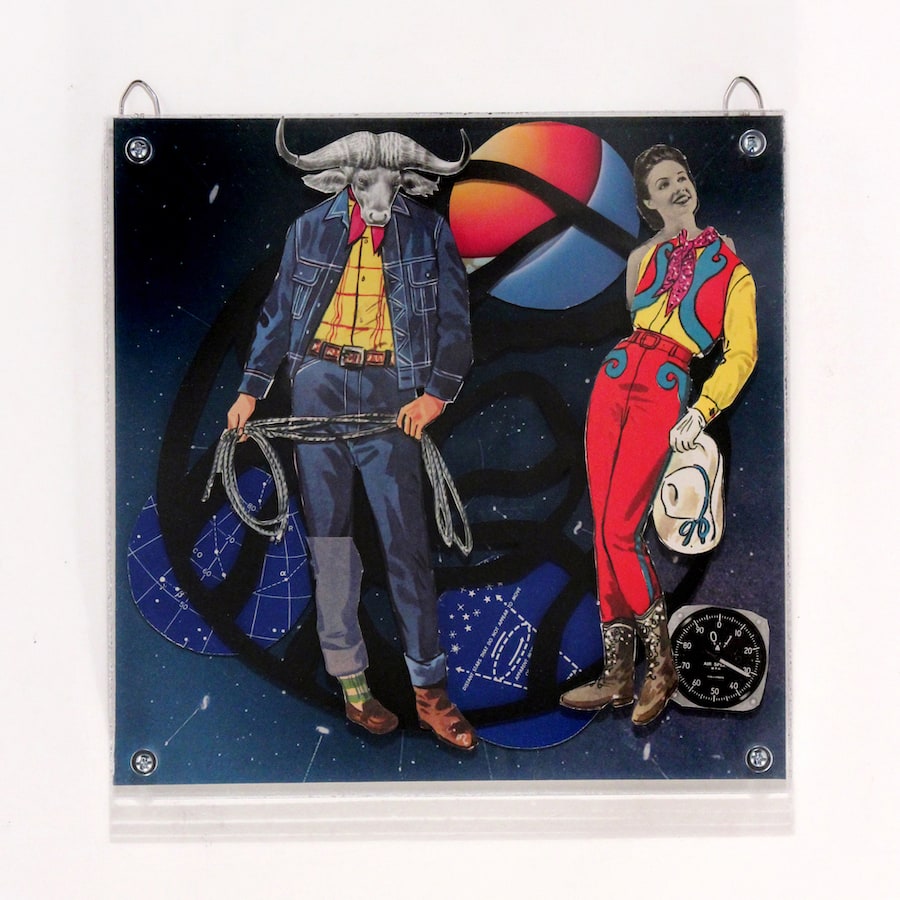 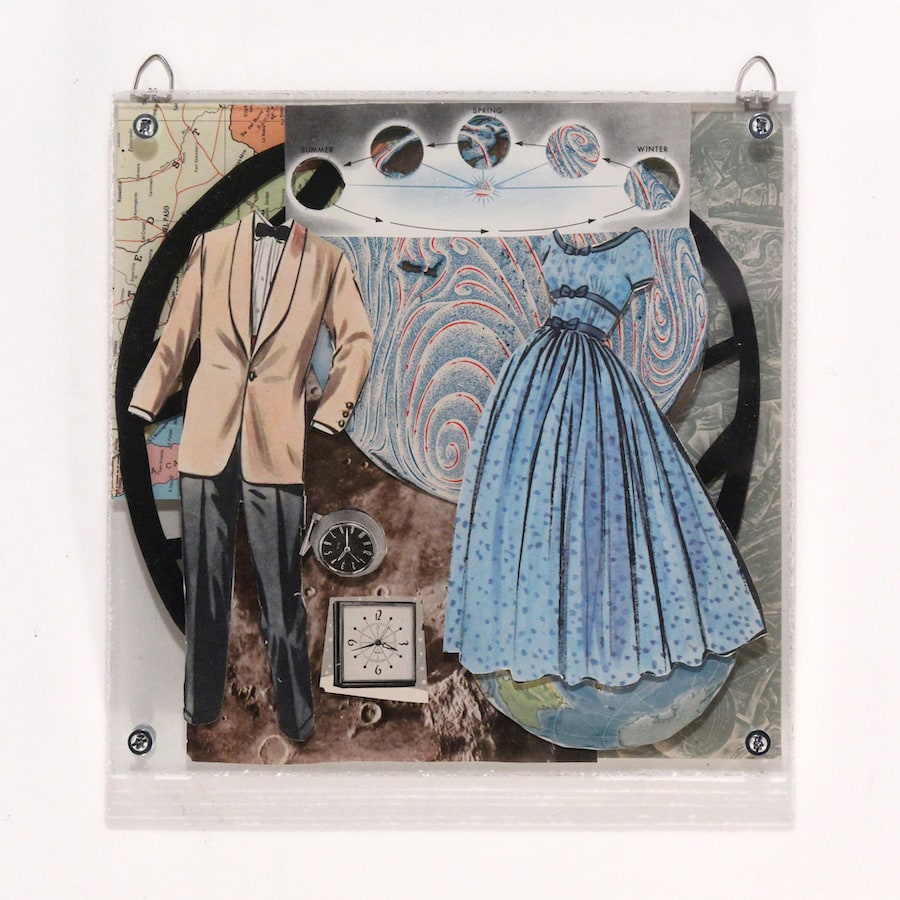 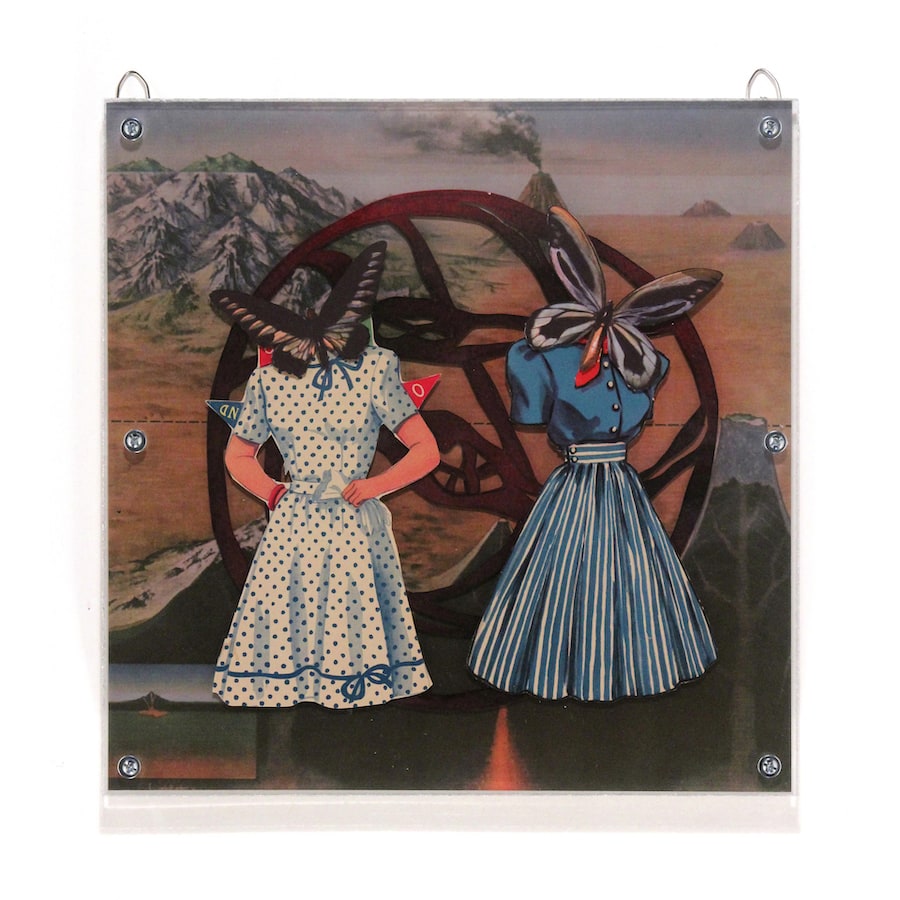 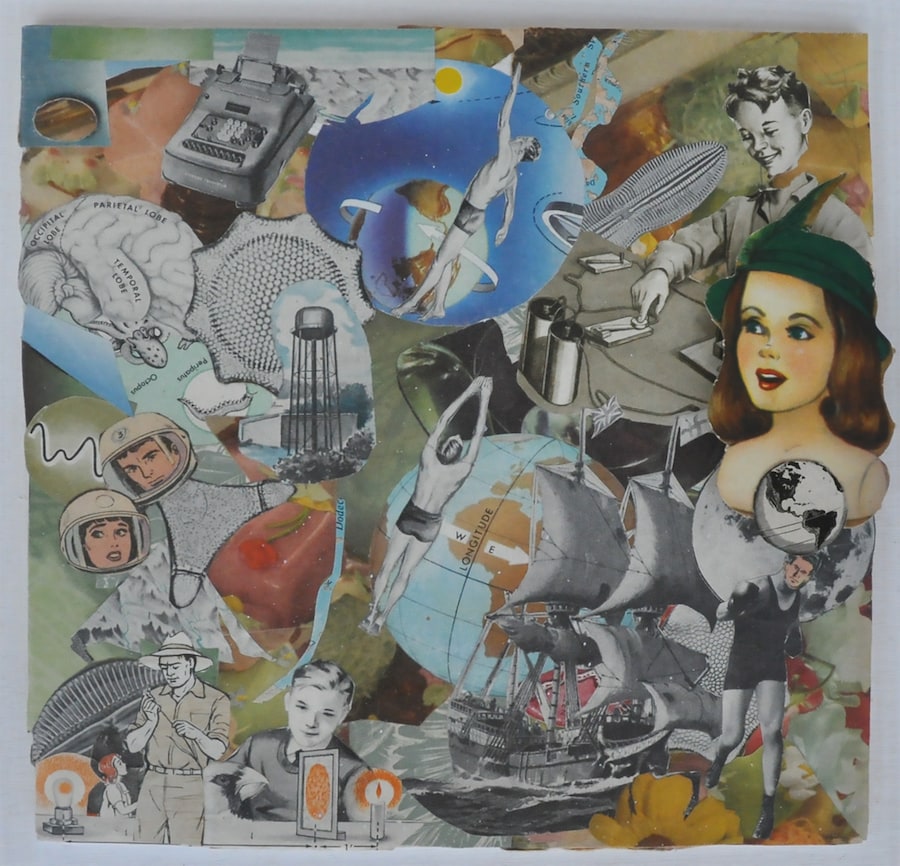 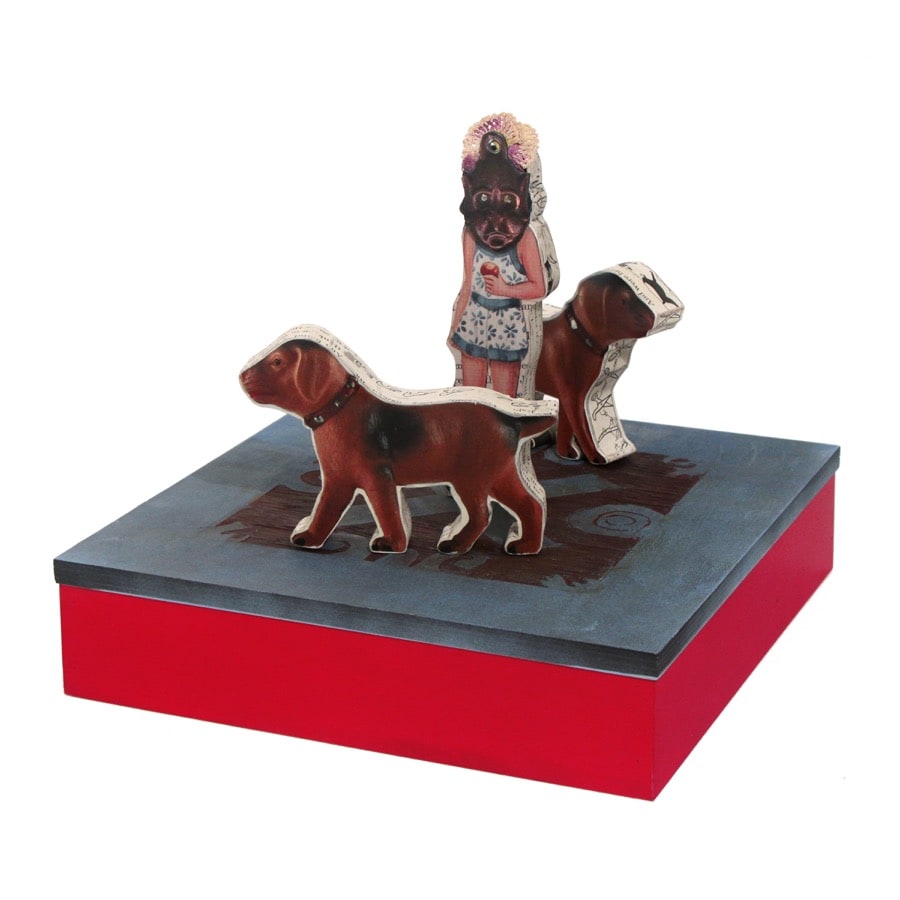 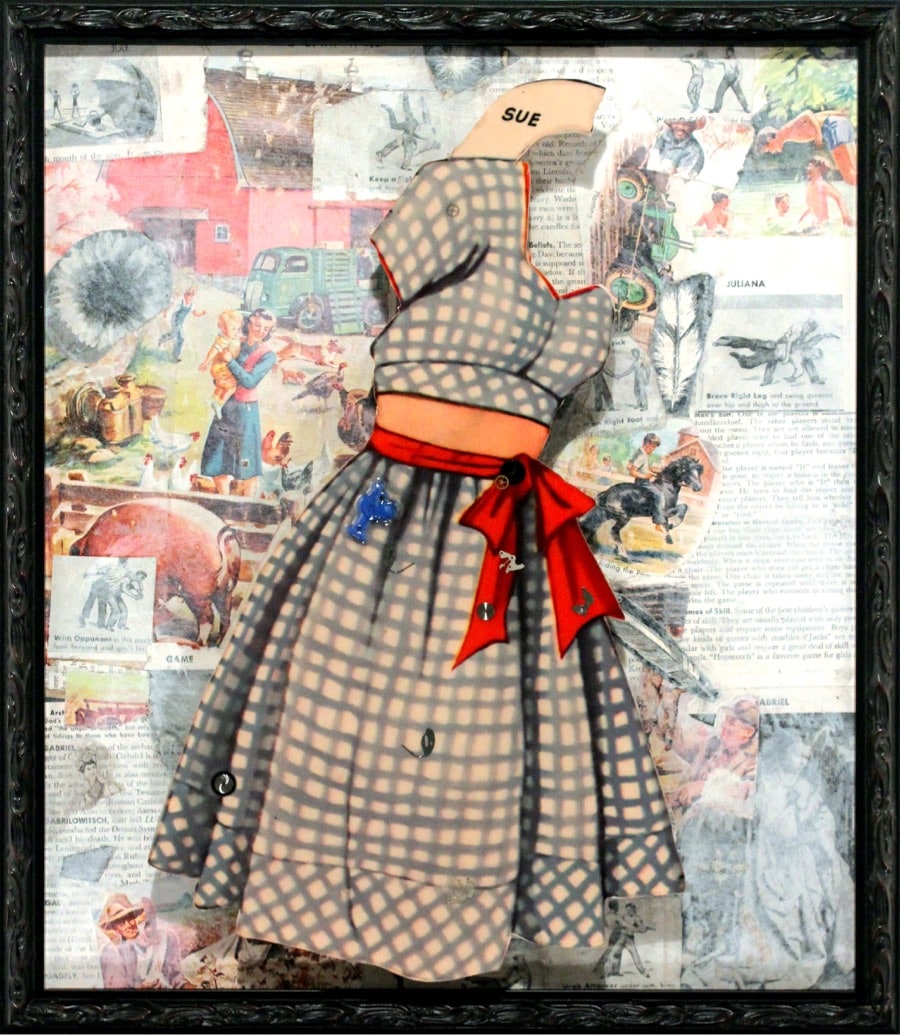 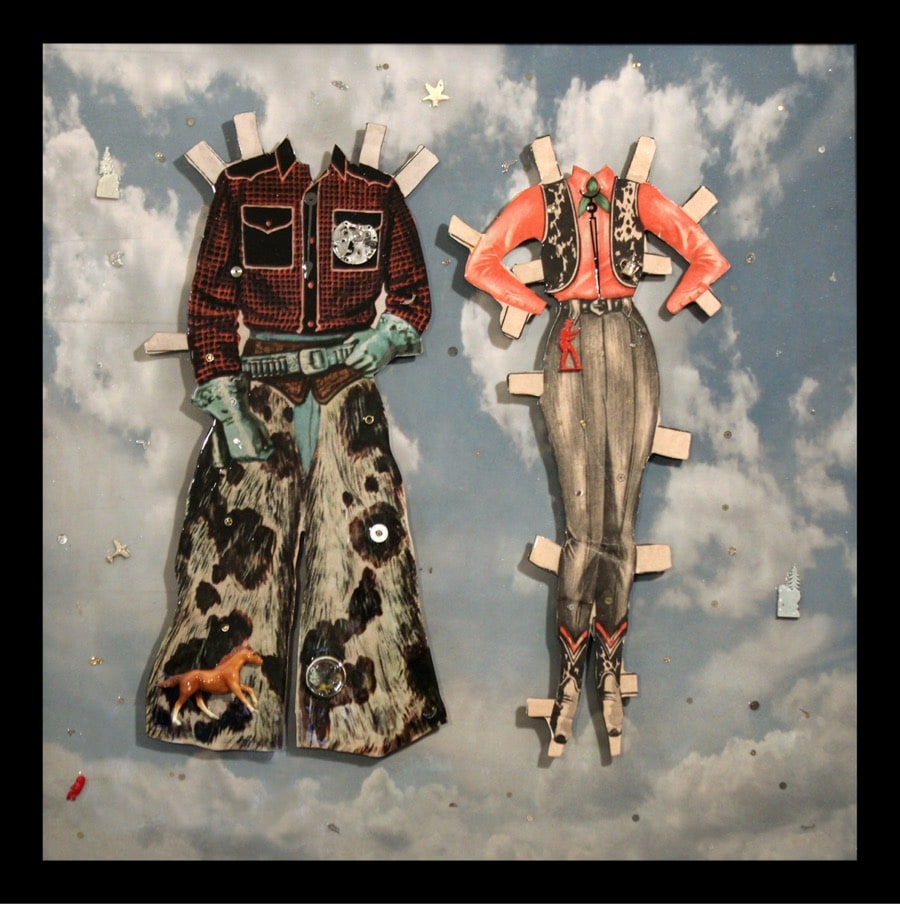 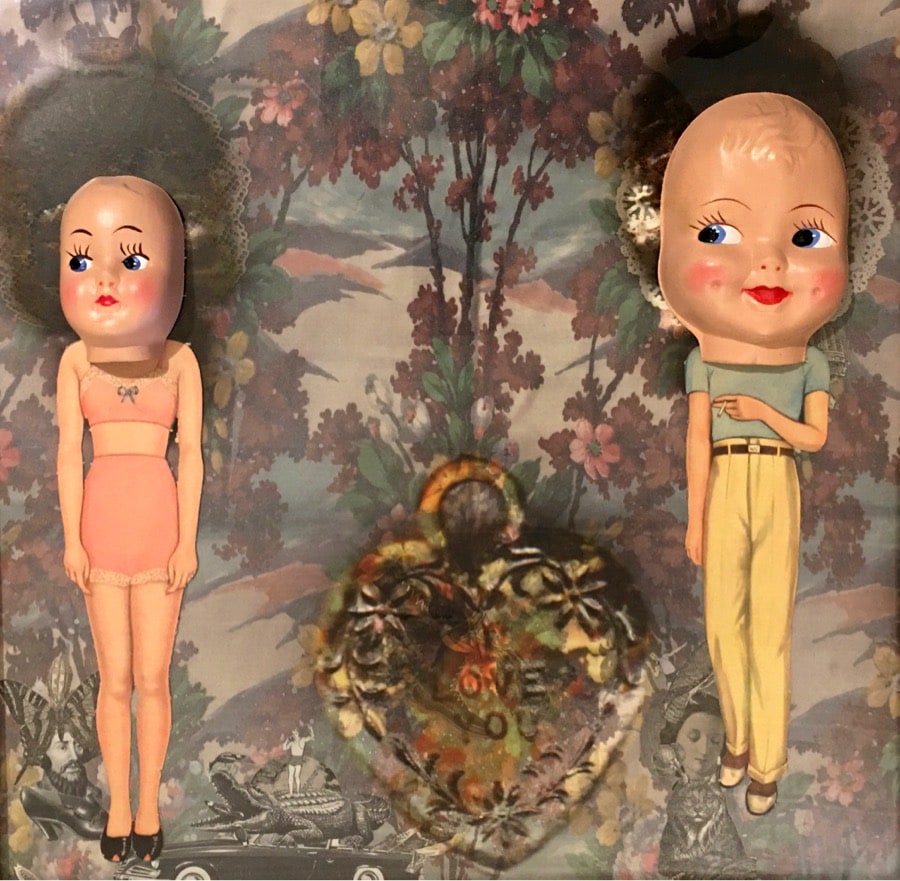 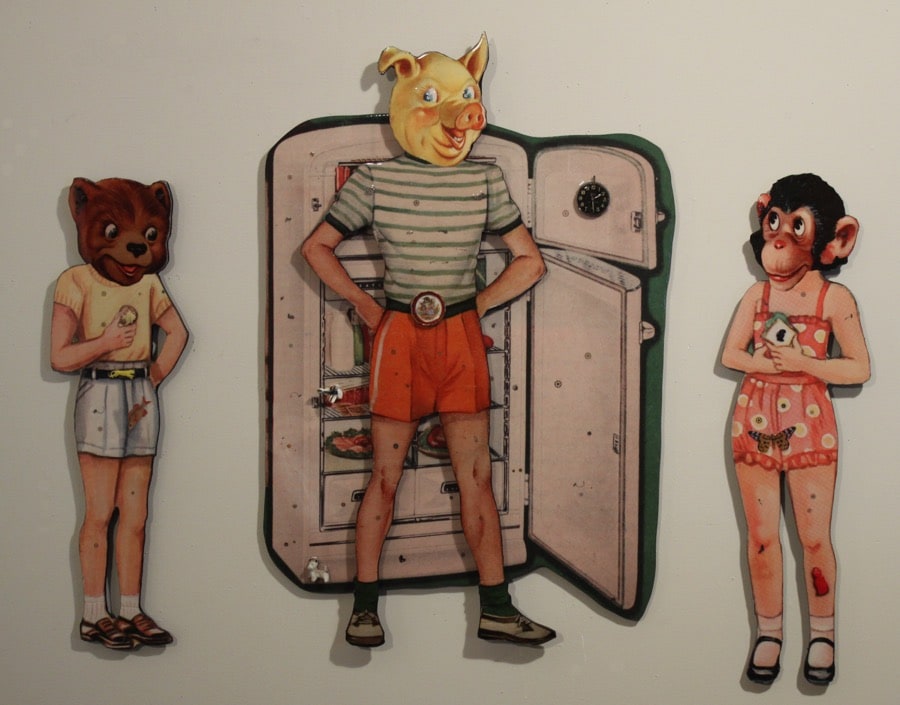 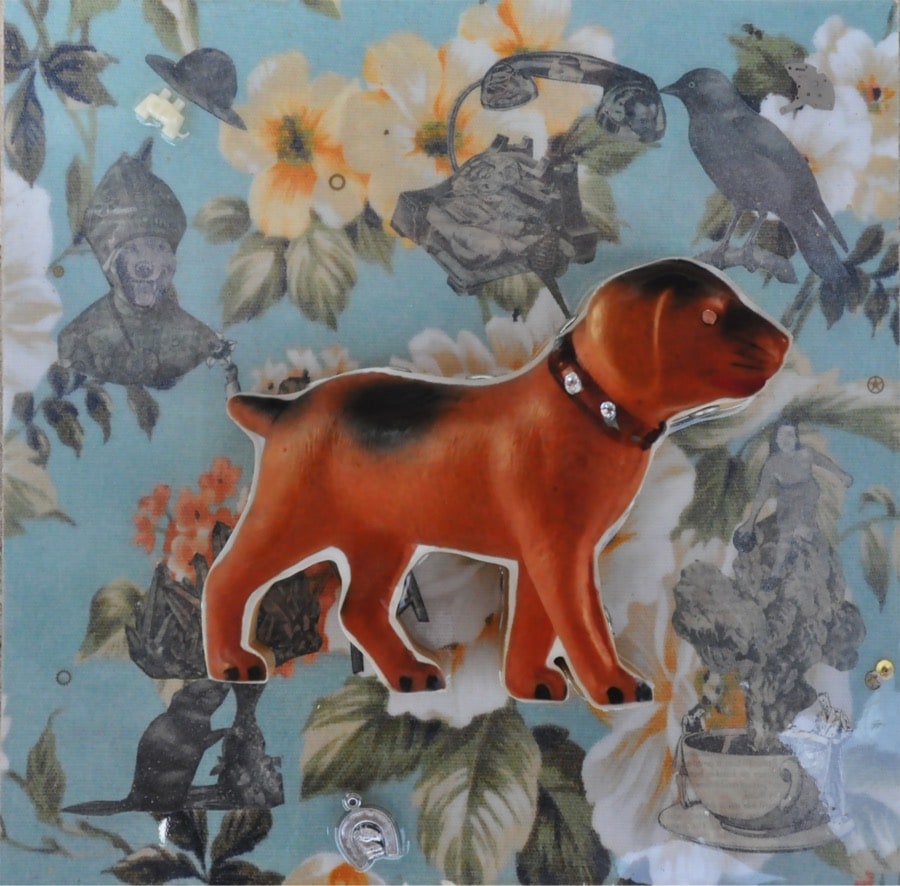 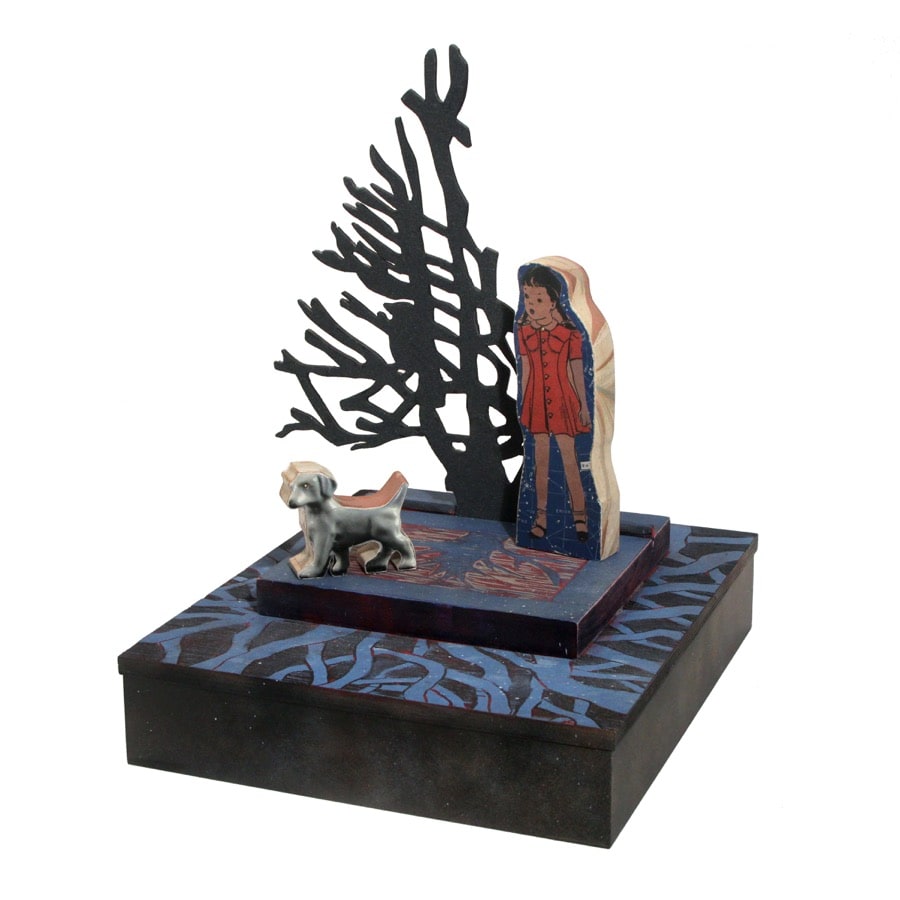 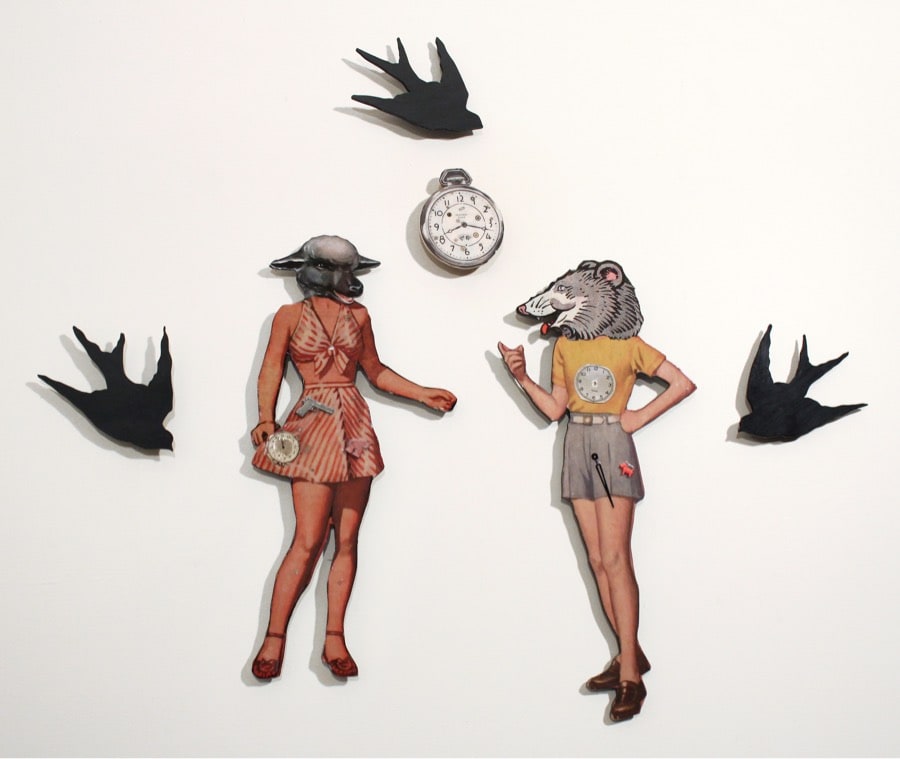 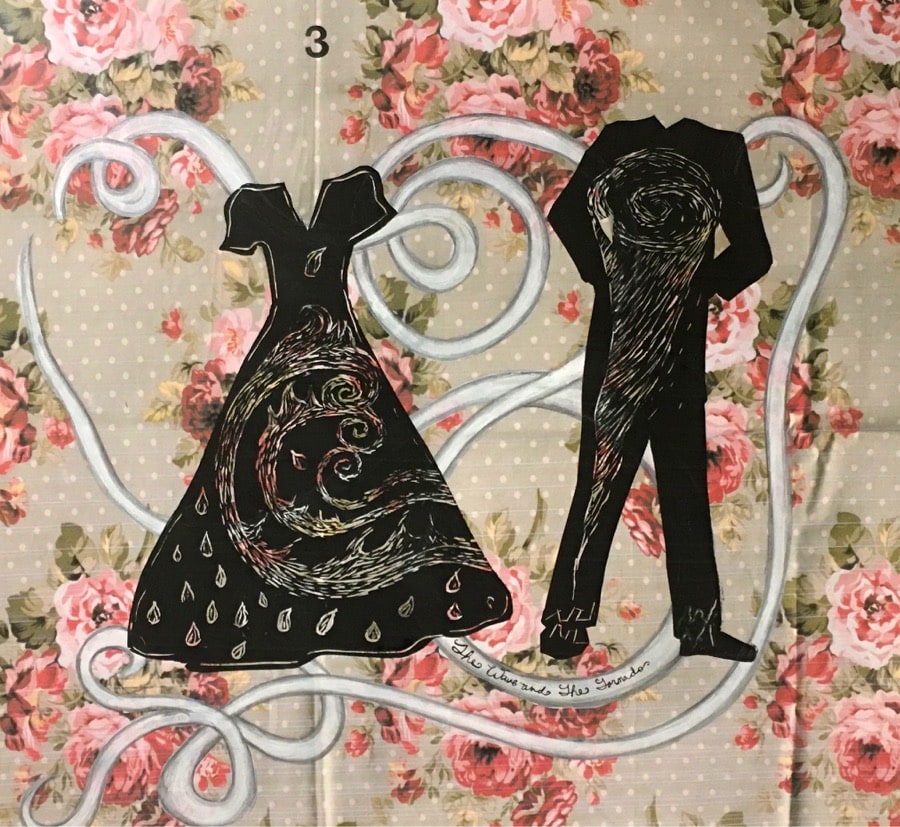 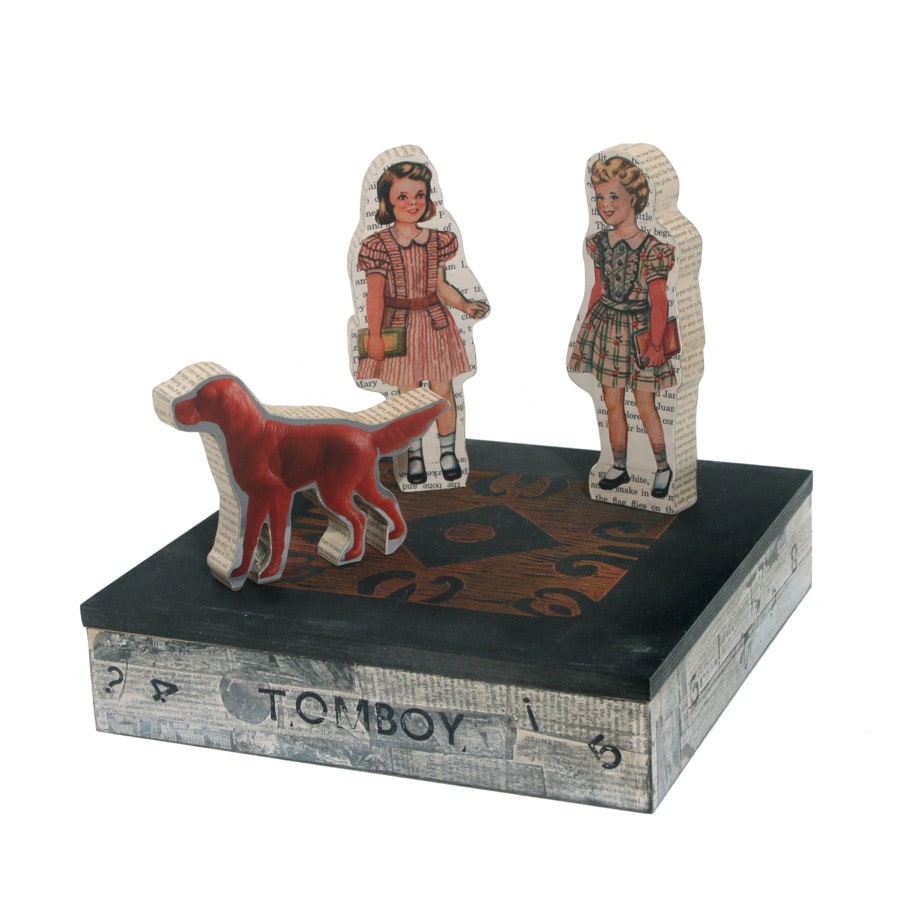